BP Bongao is located in Bongao, the capital municipality of the province of Tawi-Tawi with a population of 100,257 people based on the 2015 census and an area of about 350km2.

BP Bongao has jurisdiction of all ports in Tawi- Tawi Province that includes the Terminal Ports of Mapun, Sibutu, Sitangkai and Taganak; three (3) private ports in Languyan; and all other ports within the province.

The municipality’s territory includes Bongao Island, where BP Bongao and the Chinese Pier is located; Sanga-Sanga, where the Sanga-Sanga Airport is situated some 4kms from the BP Bongao; Pababag Island, and the nearby islands at the western side.

The Chinese Pier and BP Bongao are connected by the coastal Fisheries Road of less than 1km long. There is a new barter trade center in Bongao. 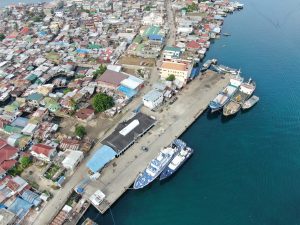 Port Facility Layout
BP Bongao has a Wharf berth-length of about 180m with its west-end being used for RORO vessel berthing operation. At the eastern portion of the port is pier, about 3m x 45m.

A Modern Passenger Terminal Building (MTPB) of about 250m2 serves domestic and foreign passengers transiting thru the port.