Taganak Island is a small tropical island surrounded by the Sulu Sea in the province of Tawi-Tawi, Philippines.  It is of volcanic origin and the largest island of the seven Philippine Turtle Islands with an area of about 116 hectares with the highest point at 148 meters and is about one mile in length. 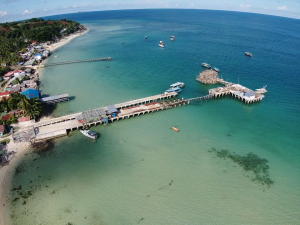 The   island   is   at   the   very   edge   of   the international   treaty limits separating the Philippines from Malaysia.

Together with three islands of neighbor country Malaysia and the surrounding coral waters, Turtle Islands are one of the world’s few remaining major nesting grounds for the Green Sea Turtles. In 1996, the  islands  were  declared  as  Turtle  Islands  Heritage Protected area by the  governments  of the  Philippines  and  Malaysia as the only way to guarantee  the  continued  existence of the  green  sea turtles and their nesting sites.

Port Facility Layout
A Trestle Pier, about 4m x 70m, with a small wharf at its end measuring some 5m x 9m.